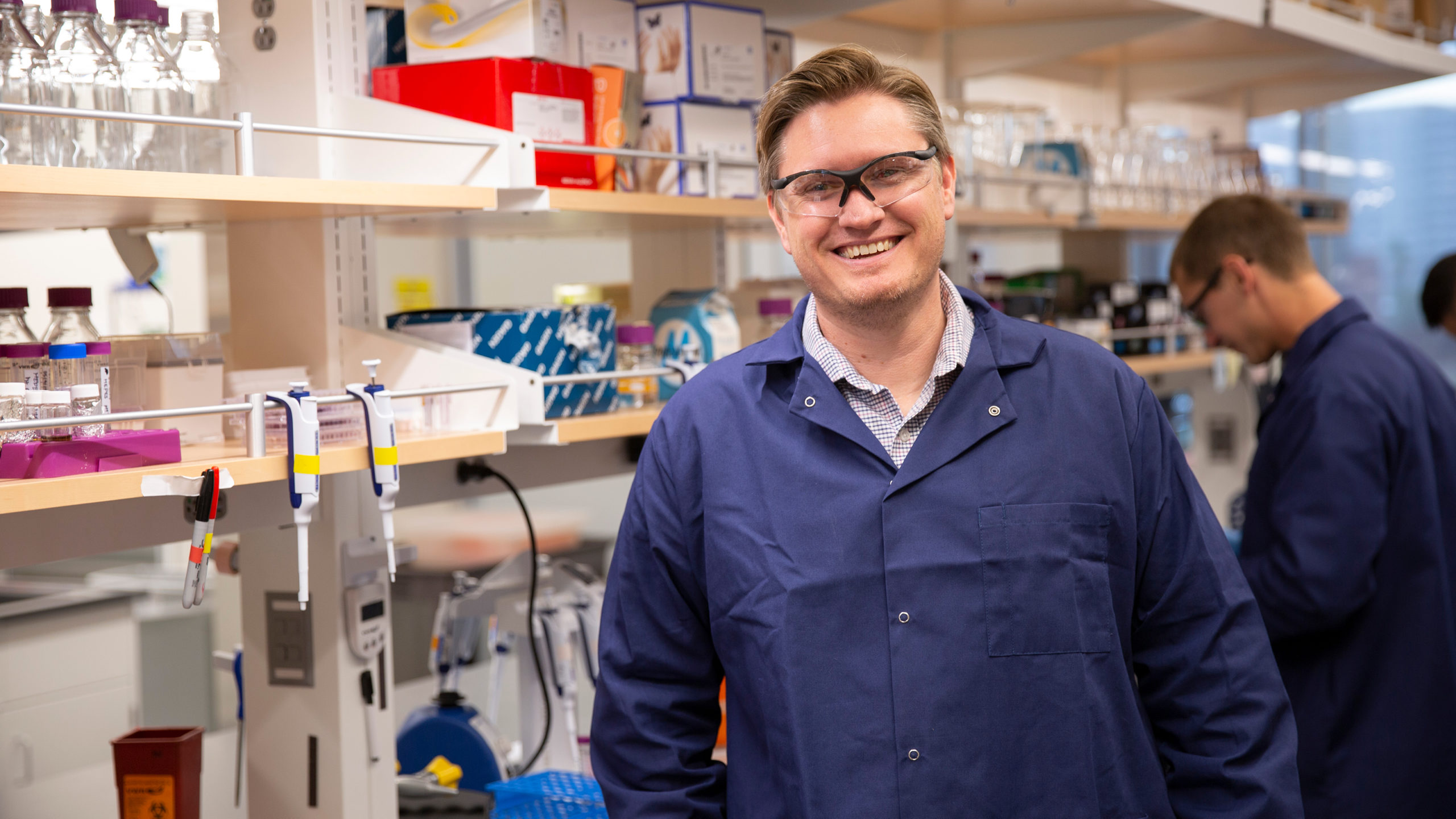 Above: Assistant Professor Brent Nannenga has been awarded a National Science Foundation CAREER Award to explore how biomolecules might be designed to synthesize new nanomaterials. Photographer: Erika Gronek/ASU

The National Science Foundation grants the Faculty Early Career Development Program (CAREER) Award to early-career faculty members who have the potential to serve as academic role models in research and education and to lead advances in the mission of their department or organization.

Twelve faculty members in the Ira A. Fulton Schools of Engineering at Arizona State University received NSF CAREER Awards between November 2019 and April 2020.

Nanotechnology is a hot topic in the engineering world. Discoveries at this tiny scale — meaning billionths of a meter, or the distance that fingernails grow each second — are inspiring optical and electronic innovations in fields ranging from medicine to construction.

But creating the substances required to advance such work is a heated issue. Fabricating nanomaterials is difficult. Results can be inconsistent, and the process requires toxic solvents and high temperatures. Consequently, the environmental costs could be significant.

Brent Nannenga, an assistant professor of chemical engineering in the Ira A. Fulton Schools of Engineering at Arizona State University, is exploring a biological route to more precise, less abrasive means of nanoparticle synthesis.

“Biology is very good at controlling the fine details of structures,” Nannenga says. “And there is a direct relationship between structure and function. If you really want to know how a biomolecule works, you need to understand its structure.”

Nannenga and his team at ASU’s Biodesign Center for Applied Structural Discovery are seeking to unlock some of these structures because understanding them, and their interaction with inorganic materials, could yield the ability to design biomolecules that create nanoparticles.

“Consider a materials scientist who wants a nanoparticle of a particular size and composition. Researchers could create proteins to synthesize that material in a very controllable, very reproducible manner,” he says. “Also, proteins work in regular aqueous solutions at room temperature. This is far more environmentally friendly than traditional processes.”

Nannenga’s vision has captured the attention of the National Science Foundation, which has selected him for a 2020 Faculty Early Career Development Program (CAREER) Award. Such recognition is reserved for researchers who show the potential to be academic role models and to advance the missions of their organizations. CAREER awards provide approximately half a million dollars over five years to further each recipient’s research. 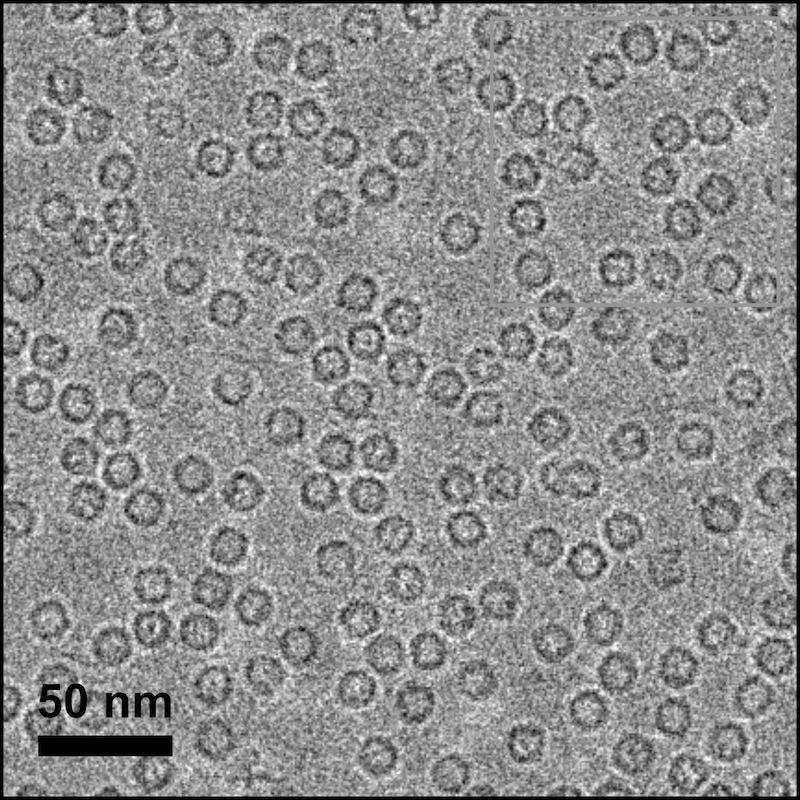 For Nannenga and his team, the pathway to that ultimate goal of building biomolecules to fabricate specific nanomaterials begins with trying to understand the structure of one common protein that already synthesizes inorganic material.

“We are looking at ferritin and iron oxide,” he says. “Ferritin exists in all kingdoms of life from bacteria up to human beings. It takes iron and oxidizes it. We have computer modeling about how that interface may work, but nobody has ever really visualized it. So, I thought we could apply some of the cryo-electron microscopy or ‘cryo-EM’ methods that I learned during my post-doctoral work to do exactly that.”

Work of this kind involves very rare equipment: electron microscopes, which use electrons instead of light to visualize molecules and even individual atoms. It was access to such a device that attracted Nannenga to ASU from his work in structural biology at the Janelia Research Campus in northern Virginia, part of the Howard Hughes Medical Institute.

“Cryo-EM is a popular field right now. The Nobel Prize for chemistry in 2017 was awarded for developing this kind of microscopy for high-resolution determination of biomolecule structures,” he says. “So when I learned that ASU was getting this kind of machine, I was ready to move back home.”

Nannenga is an Arizona native, and conducted both his undergraduate and master’s degree work in chemical engineering at the Fulton Schools.

The challenge of answering questions about the structure of ferritin using electron microscopy relates to image resolution. When materials scientists look at silicon, for example, the dose of electrons applied by the microscope can be very high. It’s hundreds or thousands of electrons per square Angstrom, a unit of measure for interatomic distances. Such a powerful beam produces a clear image of molecular structure.

“But using that dose of electrons with biological material would just obliterate your sample,” Nannenga says. “So what cryo-EM does is dial back that dose to get an image that doesn’t ‘cook’ a given protein, for example. We are talking only five to 10 electrons per square Angstrom. Unfortunately, that lower dose means a poor signal-to-noise ratio. The image lacks the clarity we need.”

The solution to this problem is to gather a lot of images. “We take thousands of these pictures,” says Nannenga. “And we pick out tens of thousands, or hundreds of thousands, of different image sections. We can then combine them computationally to clearly visualize the structures we are trying to solve.”

Nannenga is hopeful that this novel work will expand the scientific community’s understanding of the frontier between biology and materials science. As a result of this new knowledge, the creation of new “bio-inorganic” compounds with unique properties and functions may offer answers to some of engineering’s most significant challenges.