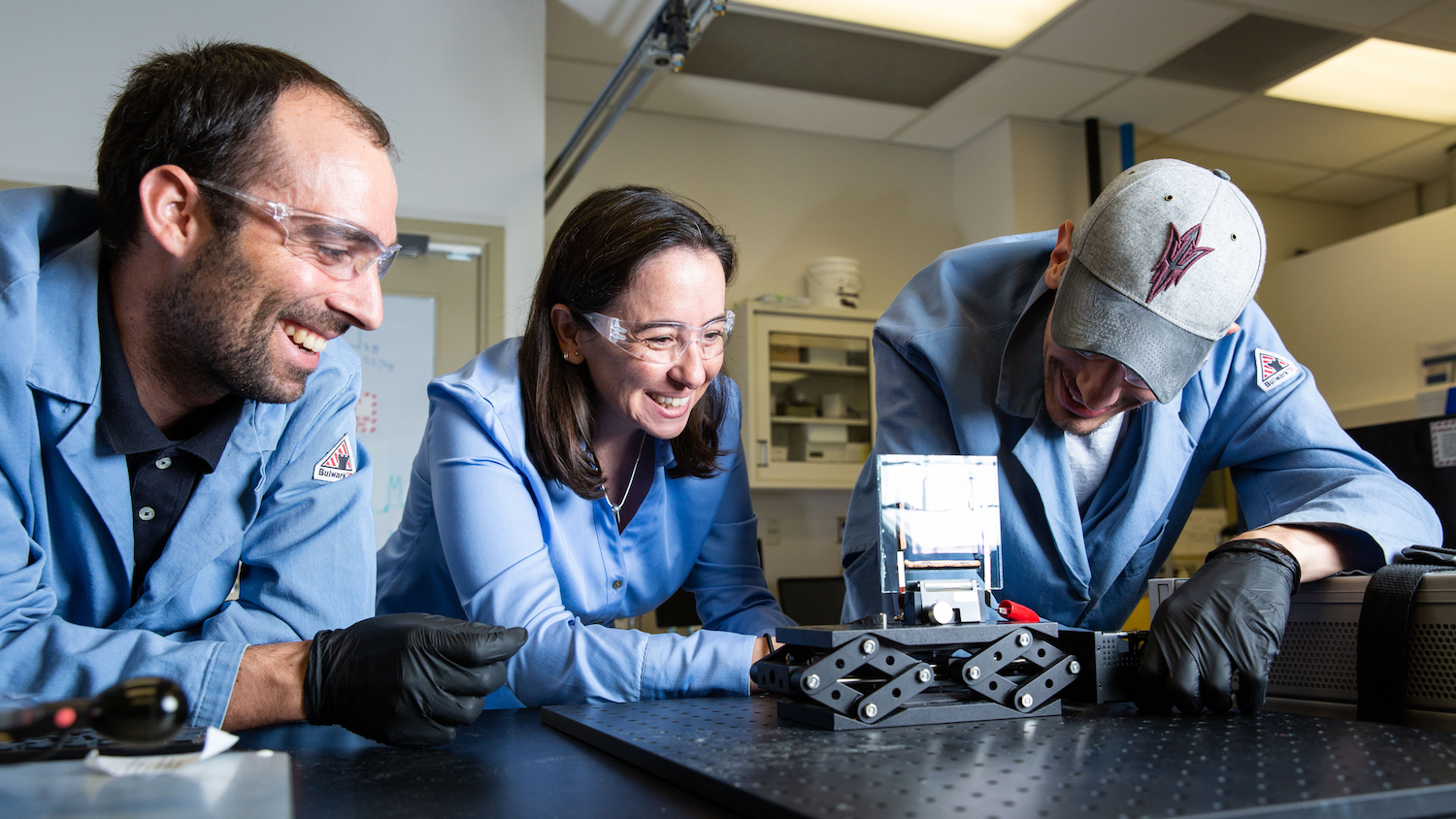 Above: Graduate students Jacob Clenney, right, and Pablo Guimerá Coll, left, talk to Assistant Professor Mariana Bertoni, center, about their research and work in the DEfECT lab. Bertoni's research and lab focus on material defects that can affect electrical and optical properties and how to engineer the processing steps to maximize performance. Photographer: Deanna Dent/ASU Now

Bertoni’s expertise is vast. From chemical engineering and materials science to electrical engineering, she has worked in several branches of engineering throughout the evolution of her career. Bertoni’s expansive knowledge base makes her a force to be reckoned with as she envisions entirely new directions for future developments in solar energy research.

“I never thought I would be considered for the award,” says Bertoni, an assistant professor in the School of Electrical, Computer and Energy Engineering, one of the Fulton Schools. “I’m honored. The award is given by my peers, which means a great deal to me.”

The award is named in honor of Joseph C. Palais, a longtime faculty member and advocate for ASU. In 1964, he joined the university’s engineering faculty. Palais retired 47 years later but continues to serve as emeritus faculty and chair of the electrical engineering graduate program.

Palais attributes the quality of the electrical engineering program to its exceptional faculty. Bertoni is no exception.

Funded by the Palais Educational Foundation, the award is bestowed on an outstanding all-around faculty member teaching in the electrical engineering program. The faculty member must demonstrate excellence in teaching, research and service.

“Professor Bertoni is an invaluable asset to our research and educational programs as she continues to make significant advancements in materials for photovoltaic technologies,” says Stephen Phillips, director of the School of Electrical, Computer and Energy Engineering. “She’s also incredibly determined to recruit, teach and train the next generation of students, researchers and leaders who will revolutionize the future of solar energy.”

Researching at the frontier of solar energy engineering

Bertoni joined ASU’s electrical engineering faculty in 2012 after holding senior scientist positions at two startup companies in the photovoltaic industry and a post-doctoral fellowship at the Massachusetts Institute of Technology. 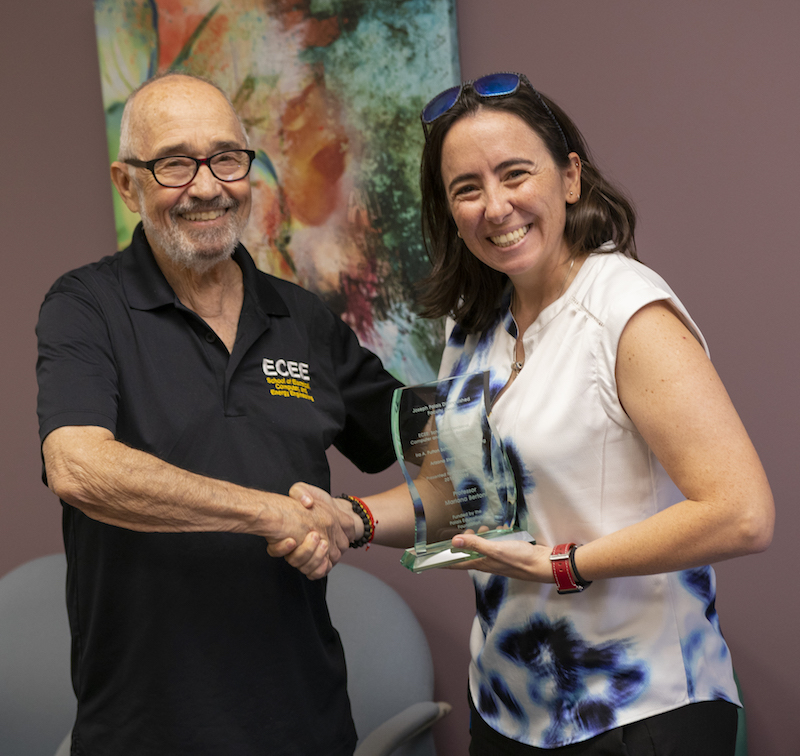 Bertoni’s impact was noted early when she made meaningful contributions through her research. She leads the Defect Engineering for Energy Conversion Technologies Lab, also known as the DEfECT Lab, which focuses on establishing efficient photovoltaics technologies based on earth-abundant and environmentally benign materials with potential for improving product performance, reliability and manufacturability.

In 2015, Bertoni partnered with SolarWorld Americas, one of the world’s largest solar-technology producers, in an effort led by the U.S. Department of Energy to develop a novel way to grow silicon ingots that will reduce manufacturing costs, increase solar cell efficiency and decrease degradation through time.

The project upscaled SolarWorld’s proprietary NeoGrowth manufacturing process production capacity to 300 megawatts of high-quality silicon wafers at a cost that is competitive with wafers on the open market.

In 2017, Bertoni was granted two prestigious U.S. Department of Energy SunShot Awards to explore a new technique for spalling, the process of exfoliating a wafer from a silicon block, and design a multimodal hard x-ray microscopy approach to improve solar module efficiency.

Bertoni served as co-principal investigator on two other SunShot Awards. She assisted Owen Hildreth, an assistant professor of mechanical engineering in the Fulton Schools at the time, to drastically reduce solar cell cost through the reduction of silver consumption. Bertoni also worked with David Fenning, an assistant professor of nanoengineering at the University of California, San Diego, to develop an approach to detect water present in photovoltaic modules.

Bertoni’s research impressed the National Academy of Engineering. She was one of four early-career research leaders invited to present on future energy strategies at the 2017 U.S. Frontiers of Engineering Symposium.

In 2018, she received NAE’s Grainger Foundation Frontiers of Engineering Award for the advancement of interdisciplinary research to innovate the design and engineering of building integrated photovoltaic cells using computation and 3D printing.

Bertoni attributes the majority of her research achievements to the success of her students and postdoctoral researchers in the lab.

Based on the spalling technique, Bertoni and Coll founded the start-up company Crystal Sonic. The startup won $8,500 at the ASU Venture Devils business plan competition and was selected as a finalist in MIT $100K Launch, an entrepreneurship competition in which teams compete to plan and prepare their venture for the marketplace.

“I think this is one great indicator of Professor Bertoni’s brilliance in research, student mentorship and technology innovation,” says Assistant Professor Zachary Holman, the Palais award winner for 2016–2017. “This is exactly the trifecta that makes her a deserving recipient of this year’s Joseph C. Palais Distinguished Faculty Scholar Award.”

“I want to make an impact through my students not only as researchers and leaders in energy and climate change but as critical thinkers,” says Bertoni. “The main outcome of my lab is people. I’ll call myself a success when I see all my students working in places they really enjoy and making an impact themselves.”

Bertoni’s teaching and mentoring have also been on par with her research contributions. She developed special courses on semiconductor technologies and solar energy and consistently gets high evaluation scores from her students.

“Working for Dr. Bertoni has been an incredibly formative personal experience. Her deep understanding and intuition on all aspects related to electrical engineering and materials science will never stop to amaze me,” says Simone Bernardini, who recently graduated with a doctorate in materials science and engineering and is now a postdoctoral researcher at the Ile-de-France Photovoltaïc Institute. “The best way to describe her is driven, intelligent and supportive.”

Another way Bertoni helps her students get recognition and succeed is through her participation with the Institute of Electrical and Electronics Engineers Photovoltaic Specialists Conference. She’s been involved in the conference’s program committee for more than eight years. This year, she’ll serve as technical program chair of the conference.

“My participation in one of the largest conferences in the world for solar materials and photovoltaic devices gives a lot of exposure and visibility to the research happening at ASU,” says Bertoni. “It helps further position the university as a leader in solar energy in the U.S.”