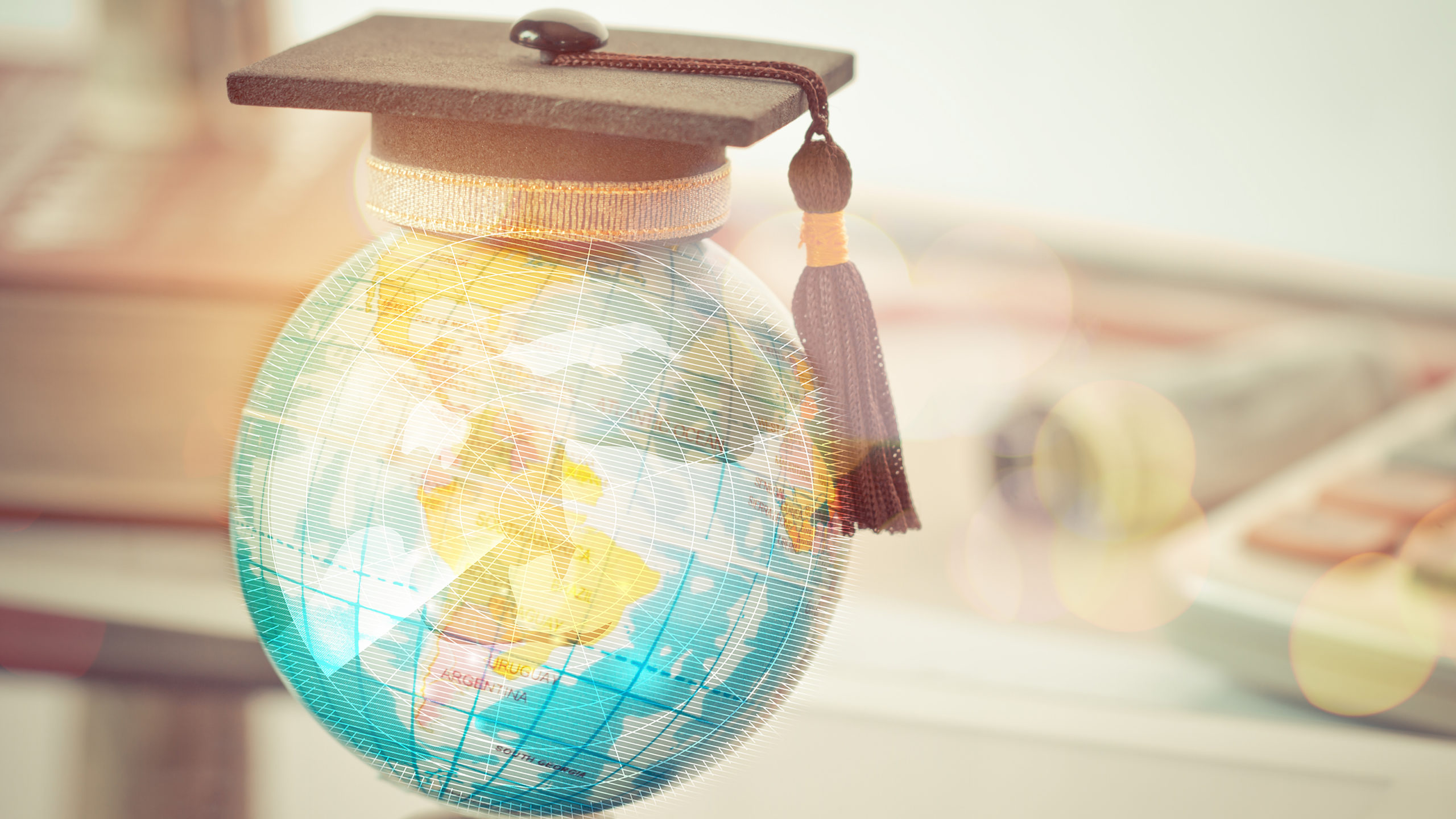 Above: A new National Science Foundation International Research Experience for Students program directed by two faculty members in Arizona State University’s Ira A. Fulton Schools of Engineering will enable graduate students to do research and get involved in professional education pursuits at one of seven partner universities around the world. Photo courtesy of Shutterstock

The work for Engineering World Health, a nonprofit that aids hospitals and clinics serving resource-poor communities in the developing world, bolstered Heida’s decision to pursue an engineering and science career “in something directly applicable to improving human health.”

She found the endeavor especially valuable because it challenged her and the other students to apply their skills and education in a place very different from their own countries.

Finding solutions to today’s growing societal problems requires the expertise of “global citizens with an international perspective,” says Heida, who aspires to be one of those experts.

As a beginning biological design doctoral student in Arizona State University’s Ira A. Fulton Schools of Engineering, Heida is getting another opportunity to move closer to her goal as she prepares to spend four months near Cape Town, South Africa. There she will work with Professor Wesaal Khan at Stellenbosch University to improve methods of harvesting, treating and purifying rainwater in the region’s rural communities that face water scarcity.

The environmental health engineering venture has the potential to help remedy the lack of access to clean water in many other countries. It also will enable Heida to complete microbiology and computational work relevant to her doctoral research on preventing Legionnaires’ disease under the direction of Fulton Schools Assistant Professor Kerry Hamilton.

What Heida hopes to accomplish makes the project precisely the kind of pursuit Fulton Schools Associate Professor David Grau and Professor Samuel Ariaratnam are looking to support through the $1 million awarded to them by the NSF to direct the project entitled International Research Experiences in Civil, Construction and Environmental Engineering.

With that award, program principal investigator Grau and co-principal investigator Ariaratnam — both of whom teach in the School of Sustainable Engineering and the Built Environment, one of the six Fulton Schools — plan to send as many as 75 students during the next three years to do research or otherwise immerse themselves in learning experiences under the guidance of top faculty members at one of seven leading universities around the world.

The partner universities are Tsinghua University in China, the University of Alberta in Canada, Stellenbosch University in South Africa, Ben Gurion University of the Negev in Israel, the Indian Institute of Technology – Madras in India, Universidad EAFIT (originally the Escuela de Administración, Finanzas e Instituto Tecnológico) in Colombia and the University of New South Wales in Australia.

In addition to a first-hand look at how engineering is done in different countries, Grau and Ariaratnam say the quality of education and research at those seven universities will offer students working environments conducive to developing global networks of collaboration that can have significant career-enhancing value. 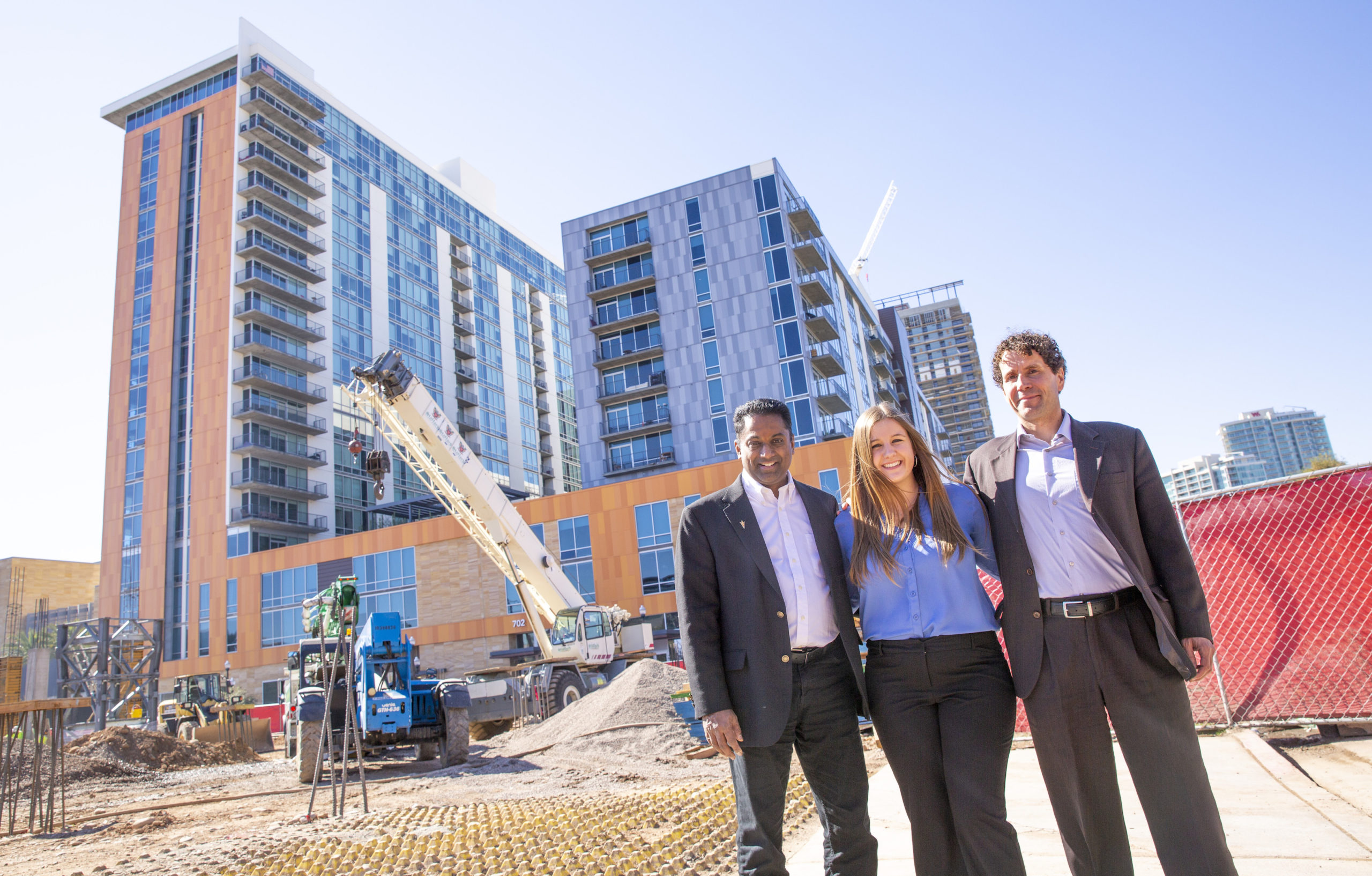 Fulton Schools Professor Samuel Ariaratnam (at left) and Associate Professor David Grau (at right) pose with biological design doctoral student Ashley Heida near a construction site close to Arizona State University’s Tempe campus. Heida is one of the first students to be accepted into an international research program administered by Ariaratnam and Grau. She will work with researchers at Stellenbosch University in South Africa to develop solutions to water scarcity. Photographer: Erika Gronek/ASU

It was Grau and Ariaratnam’s idea to collaborate with the American Society of Civil Engineers, or ASCE, that drew the NSF’s strong interest in their proposal for the new program.

The ASCE is the nation’s oldest engineering society, and has more than 150,000 members in 177 countries. It is a leading presenter of technical and professional conferences and continuing education, supports nine institutes focusing on specialties related to civil engineering, is the largest publisher of civil engineering content and is an authoritative source for professional codes and standards in the field.

The NSF mission is not only to advance research in the national interest, but also to train the next generation of researchers, says Fahmida Chowdhury, a program director in the NSF’s Office of International Science and Engineering, who oversees the International Research Experiences for Students programs.

Chowdhury says Grau and Ariaratnam’s idea of engaging with the ASCE to provide students access to the organization’s vast resources is a relatively new approach to offering international experiences for students.

“Their model can be adapted to provide international experiences to students in some other fields of science, engineering and technology,” Chowdhury says. “The knowledge about engaging with professional organizations can be transferred to other fields and have impacts far beyond ASU and specific areas of engineering.”

In addition to its benefit for ASU, the program could help provide incentive for other universities to pursue collaborations with nongovernment organizations, nonprofits and professional organizations focused on myriad areas of national interest.

“We can be at the forefront of generating new knowledge about how to productively structure these types of student research experiences,” Grau adds.

Grau and Ariaratnam’s team includes Verena Schneider, a civil, environmental and sustainable engineering doctoral student, and Lydia Ross, a clinical assistant professor in ASU’s Mary Lou Fulton Teachers College. Schneider and Ross will conduct research to assess the impacts of the students’ international research experiences and report their findings to the NSF.

“We are really hoping to set a new benchmark for these kinds of programs and be well positioned to do more of them in the future,” Ariaratnam says. “From the NSF’s point of view, this type of international program can raise our game as far as global competitiveness by broadening the expertise of future U.S. engineers and scientists.”

From ASU and the Fulton Schools’ standpoint, the program provides “a bigger international stage,” Ariaratnam says. “We are going to be sending students to leading universities on seven different continents over three years, so those universities are going to learn a lot about what we are doing here in civil, construction and environmental engineering and maybe send some of their students to us for future international experience.”

Along with ASU student Heida, two other students — one from Auburn University in Alabama, the other from the University of California, Davis — have been approved for spring and summer excursions through the program.

Assistant Professor Hamilton, Heida’s mentor, has working relationships with faculty members at the partner university where Heida will do research. Grau says an added benefit in such situations is that students’ efforts abroad likely will enhance the research collaborations between ASU and the universities in other countries.

ASU alumnus Maureen Carlin says she would counsel students in the new program that “getting out of your comfort zone” in other countries will enable them to better learn about the variety of means and methods used by engineers around the world.

With Ariaratnam as her advisor, Carlin earned a doctoral degree in 2014 in the Fulton Schools civil, environmental and sustainable engineering program, with a focus on construction engineering. She did research for her doctoral dissertation abroad through an NSF Graduate Research Diversity Supplement grant.

Carlin says she found it equally enlightening to delve into a foreign culture and seek to understand the societal values that drive the motivations of engineers and other professionals who are shaping their parts of the world.

“I really gained an appreciation for the American standard of living and realized how much American students take for granted. But I also appreciated the work ethic of the Chinese faculty and students,” says Carlin, who now works for Laney Directional Drilling, a trenchless pipeline construction company based in Houston, Texas.

The international experience continues to impact her career. At international gatherings in her field, she sees some of the students she worked closely with during her time in China.

“I’ve made what I believe will become lifelong friendships,” Carlin says. 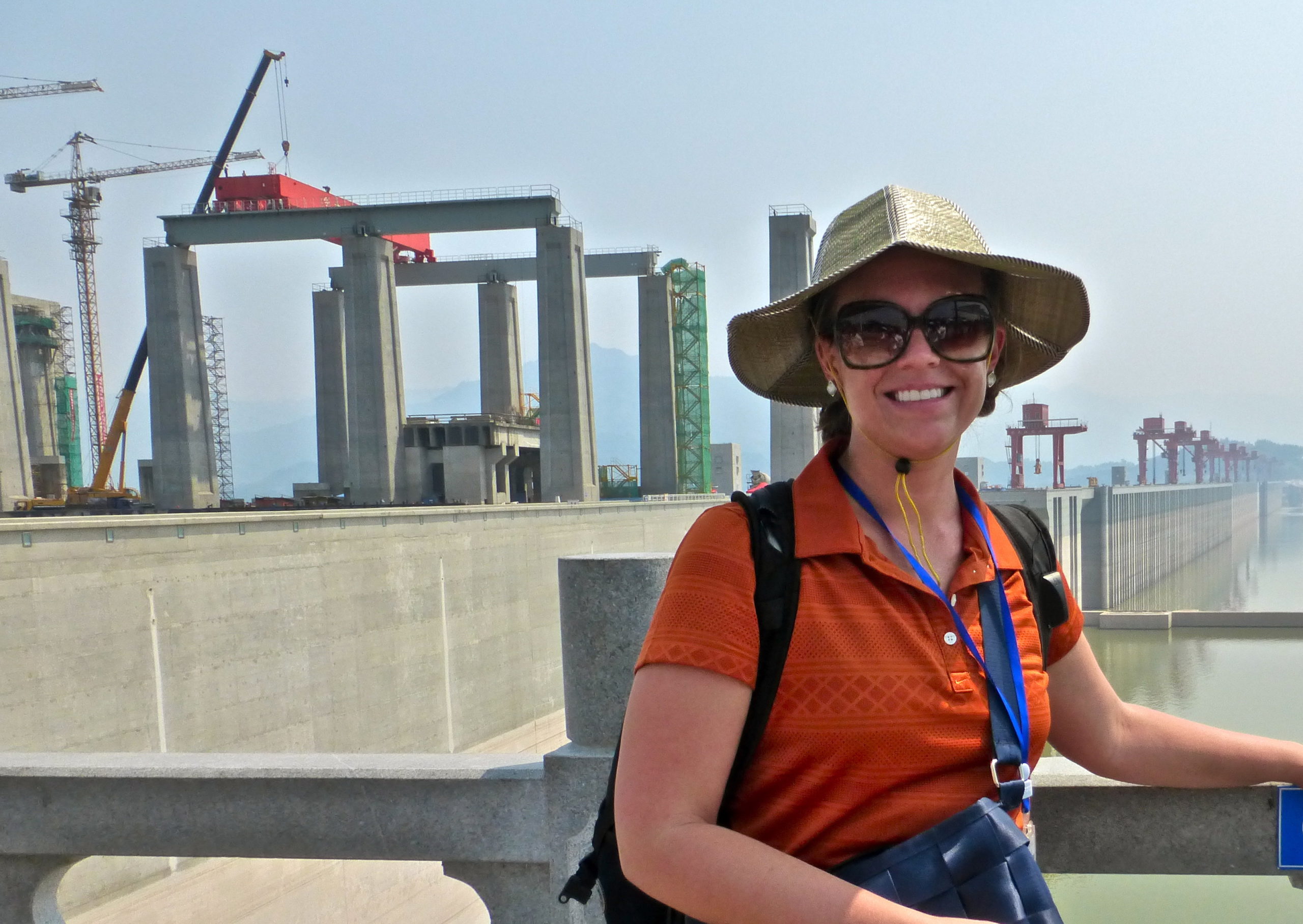 Maureen Carlin spent more than two months in mainland China as part of a study-abroad trip she took while earning a doctoral degree in the Fulton Schools. The trip was made possible by a program similar to a new ASU-led International Research Experience for Students program that will provide dozens of students from universities throughout the United States opportunities to learn at leading universities in other countries. Photo courtesy of Maureen Carlin.

How to apply for the new international student research program

United States citizens, U.S. nationals or permanent residents are eligible to apply for participation in the International Research Experiences for Students program. Applicants must be graduate students at a U.S. institution of higher education pursuing a degree in civil, construction or environmental engineering, or closely related fields. Preference is given to doctoral students but highly motivated master’s degree students will also be considered.

Applicants must also have approval letters from their U.S. research mentor and be members of the America Society of Civil Engineers, or ASCE. A panel of professors with expertise in a variety of engineering fields will assess students’ proposals for international learning experiences lasting anywhere from two weeks to a full semester. The program provides students airfare, visa fees and housing.

After completing their experiences in other countries, students will be encouraged to make presentations about their research pursuits abroad at future ASCE conferences or regional or local gatherings of ASCE members. The program will provide support to attend.

Consideration of applications for fall semester participants will begin soon. Engineers around the world benefit from online master’s program