Above: Participants of the ASU/USPCAS-E workshop on gender. Photographer: Hassan Zulfiqar/USPCAS-E

The U.S.-Pakistan Centers for Advanced Studies in Energy (USPCAS-E) held a workshop in Islamabad, Pakistan this spring with the hopes of improving gender equity for women in science, technology, engineering and math fields.

The three-day workshop was helmed by Professor Chad Haines of Arizona State University, who specializes in cultural anthropology and topics related to the contemporary Muslim world. The prominence of women in STEM fields from Pakistan differs greatly depending on the region according to Haines. In the Punjab region for example, 20-30 percent of STEM students are women. In the Khyber Pakhtunkhwa region, the percentage of women is actually much lower.

Dr. Haines summarized that the challenge in the region, “is creating a foothold where women are encouraged and supported and based on that, there is much greater potential for increasing the number of Pakistani women in the STEM fields.”

The workshop is part of a greater effort by USPCAS-E, which is a project funded by USAID as part of a partnership between Arizona State University and two leading Pakistani universities: the National University of Sciences and Technology (NUST) and the University of Engineering and Technology (UET) Peshawar. The goal is to focus on applied research relevant to Pakistan’s energy needs and help produce skilled graduates in the field of energy. Fostering student and faculty exchanges are part of a greater goal, which also includes an emphasis in gender equality.

The workshop attracted a variety of participants including students, educational administrators, professors, researchers as well as professionals from the engineering field.

Muhammad Asad, a professional engineer who attended the workshop said that the subject of gender equality was eye-opening for him. “I [had] never heard about this type of topic being discussed on this kind of platform before.” Asad had high hopes about the workshop saying, “it all starts from self-development you know. If you learn something then you practice it yourself.” The workshop has the potential to ripple beyond its original audience. Asad has plans to disseminate what he has learned throughout his social circles.

There was a mix of both men and women attending the event, some of whom were seeking role models and others, inspiration. H. Masooma Naseer Cheema, a scientist and assistant professor said she attended to, “revitalize my passion and keep my spirit high by knowing that I am not alone in the journey of becoming a successful professional female.” Speaking from experience she said, “the life of a professional career women is not an easy task.”

Following the workshop, another attendee, Anaiz Gul Fareed, who is a graduate student at NUST hoped to spread, “awareness to different localities and [various] under-developed areas of my country regarding girls education.”

Ishtiaq Hussain, who is self-described as being from a very conservative family expressed that, “Before attending the workshop I was not really in favor of females getting an equal opportunity everywhere, but now I have learned how to help females and provide them with an equal opportunity to become a successful.” 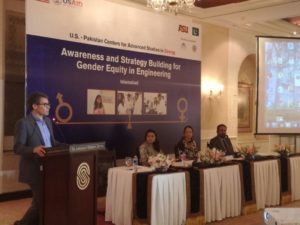 The format of the workshop was less of a lecture, and more of an open exchange of ideas.

Cheema praised the event saying that, “most of the gender equity-related workshops usually address women. But [the] good thing about this workshop is that it addressed both genders.”

Participants weighed and analyzed the difference between, equality, equity and justice. “I would like to get justice rather than equity and equality,” said Cheema.

Anaiz Gul Fareed reflected on several examples of gender inequity, citing, “that there are several offices in Pakistan where there are no facilities for women restrooms.” He also learned that, “more than 50 percent of girls who opt for medical sciences,” may do so, “just because they can get a well-settled boy to marry.”

“While attending this session, I decided to help my three daughters to grow without limiting them,” continued Fareed. “I promised myself that I would help them to achieve whatever they want to.”

The workshop hoped to reach individuals because it is the everyday administrators, faculty members, professional and students who become empowered to speak up that possess the potential to foster a culture of gender equity and encourage women in the STEM fields.

Gender issues in Pakistan are also addressed by the project through a scholar exchange program in which ASU which has had an exponential growth of female participants.

To date, this is the fifth workshop that USPCAS-E and ASU has held in Pakistan on various topics related to the project, including green building practices and photovoltaics to name a few.

USPCAS-E will continue to deliver workshops in Pakistan through 2019. Essential Reading: Books to light your path to the future