Redesigning the mindset for girls in STEM

Redesigning the mindset for girls in STEM 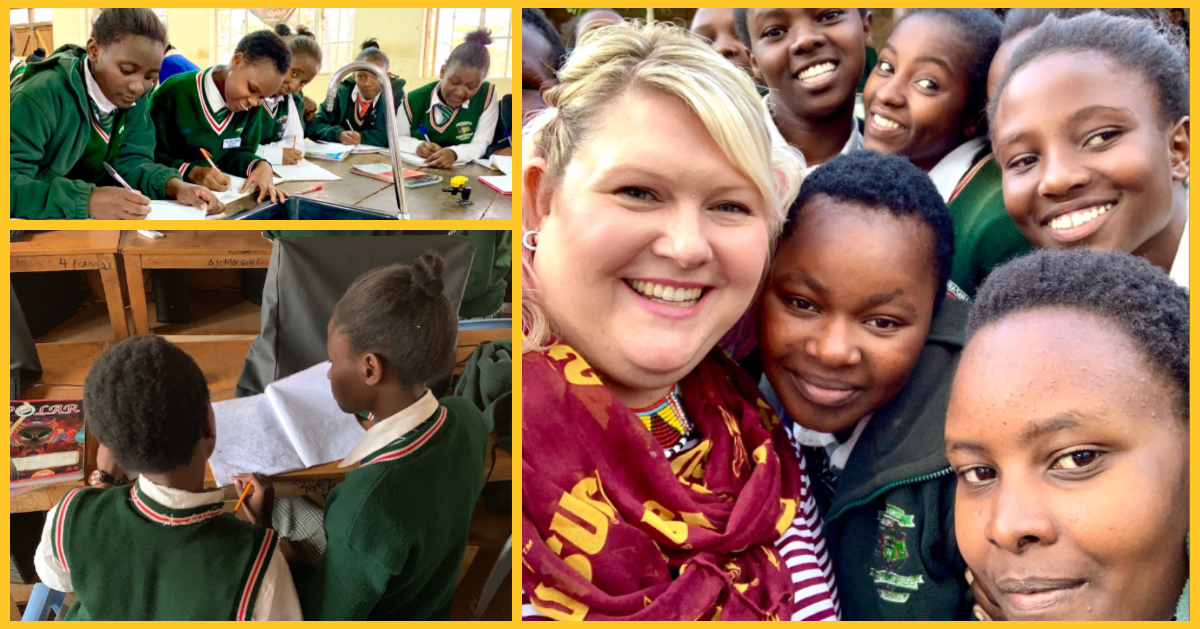 Above: Christina Carrasquilla (center photo), a graphic information technology lecturer with the Ira A. Fulton Schools of Engineering at Arizona State University, brought her design thinking curriculum from Arizona to Africa to inspire high school girls to consider careers in science, technology, engineering and math. She worked with Mandela Washington Fellow Janet Silantoi from Kenya to develop an app boot camp for girls at the AIC Moi Girls Secondary School in Samburu County, Kenya. Photo courtesy of Christina Carrasquilla

A story of changing lives starts as all good stories do — with good food and good conversation.

“When you meet that person you want to collaborate with, you want that great conversation to keep going,” says Carrasquilla, who teaches graphic information technology at The Polytechnic School, one of the six schools in the Ira A. Fulton Schools of Engineering at ASU.

The two tech enthusiasts bonded over their passion and helping to spark girls’ interest in science, technology, engineering and math. And just like that, a conversation over tacos ignited an impactful outreach initiative that would span more than 9,000 miles.

The Mandela Washington Fellowship for Young African Leaders is the flagship program of the U.S. government’s Young African Leaders Initiative, or YALI.  Since 2014, nearly 4,400 young leaders from every country in Sub-Saharan Africa have participated in the Fellowship.  The Fellows, between the ages of 25 and 35, are accomplished innovators and leaders in their communities and countries.

Each Mandela Washington Fellow takes part in a six-week Leadership Institute at a U.S. college or university in one of three tracks: business, civic engagement or public management. The Institutes support the development of Fellows’ leadership skills through academic study, workshops, site visits, community service activities, cultural activities, mentoring and networking with U.S. leaders, and collaboration with Americans.

To further strategic partnerships and professional connections developed during the U.S. Leadership Institutes, the Mandela Washington Fellowship also includes a Reciprocal Exchange Program, where Americans have the opportunity to travel to Africa to continue collaborating on projects with the African Fellows they met in the U.S. Working together across a 10-hour time difference, Carrasquilla and Silantoi applied to the exchange program so Carrasquilla could travel to Africa. As part of the program, she lent her expertise in digital design and STEM outreach to high school girls at AIC Moi Girls Secondary School in Samburu County, Kenya.

Tech design and community engagement are skills in high demand for the Fellowship, says Tara Bartlett, a doctoral candidate and graduate research assistant in ASU’s Mary Lou Fulton Teachers College who has been working with the Mandela Washington Fellowship at ASU since 2014.

“Each year, many Fellows are interested in tech design and how to engage communities, especially rural communities, through technology,” Bartlett says. “Additionally, many Fellows are looking to combine those skills with social issues, like women’s disenfranchisement and empowerment. So, we look for facilitators who can present on several topics concentrically. [Carrasquilla] has an extensive résumé of experience and outreach with a proven track record of mentorship.”

As a first-generation college student who grew up in a time where technology classes were seen as “for the boys,” Carrasquilla is no stranger to the importance of having female mentors and role models in STEM. She wants girls in high school and younger to see careers in STEM as attainable and something they can achieve if they’re interested.

“We see similar issues with women in technology [in the U.S.], but the stakes are a lot higher in Kenya where it’s not expected for girls to get an education,” Carrasquilla says. “It’s not championed, but it should be an option if they feel like it’s right for them.”

But the AIC Moi Girls Secondary School is a special case for high schools in Kenya. The girls-only, private boarding school receives government funding to focus on STEM education.

Silantoi leads after-school computer clubs at AIC Moi Girls Secondary School and at other schools in the area where she has been meeting and talking with the girls about computer networking and cybersecurity. She brought in Carrasquilla to show them a different aspect of technology. AIC Moi Girls Secondary School students work on designing an app that solves an issue they see in their community. Christina Carrasquilla led a three-day boot camp with the design thinking curriculum she teaches in the graphic information technology program in The Polytechnic School, one of the six Ira A. Fulton Schools of Engineering. Photo courtesy of Christina Carrasquilla

Carrasquilla brought the ASU design thinking course techniques she teaches in The Polytechnic School and translated them for a high school app-building boot camp.

“Apps are a really accessible way to understand what technology does and can do,” Carrasquilla says. “We do paper prototyping to gain concepts of digital workflow and we look at the logic behind the apps we were making.”

Part of this prototyping involves thinking about what happens when the user interacts with particular features.

Though we often think of apps as being games, entertainment or sources of information, they can also help solve problems the app developers see in their communities. The girls in Kenya didn’t shy away from bringing up big issues they could help address with their apps: corruption, female genital mutilation, early marriages, public health and girls’ education.

Silantoi worked with the high school students to successfully develop a female genital mutilation alert app that alerts authorities of imminent incidences of the illegal practice. The fully functioning app has inspired the girls to see what they can accomplish with technology.

“It’s empowering for them to know they can make a difference,” Carrasquilla says.

Many of the students focused on different forms of corruption, which is something that affects the girls’ daily lives — for example, bank corruption can mean a girl can’t return to secondary school because her family lost the tuition money.

Others created apps on different topics. One group designed an app to teach children how to avoid getting bitten by infection-spreading insects called jiggers. Additional groups created apps to help girls overcome obstacles to staying in school and to combat drug abuse.

Carrasquilla says she and the girls saw how “working together to solve problems can make the world better at a small scale.”

“As graphic designers, we don’t often think we make an impact on the world.” Carrasquilla says. “But we design the experience of technology and we do have the ability to make a global impact.” Christina Carrasquilla (left) poses with the winning app team, who designed an entertainment app that showed girls how to make good choices and stay in school by avoiding undesirable situations that could lead to pregnancy or drug use. Teams of high schoolers worked together to design and prototype an app on paper that solves a problem they see in their communities in Samburu County, Kenya. Photo courtesy of Christina Carrasquilla

Showing women can have careers, families and an entrepreneurial spirit

Through the Mandela Washington Fellowship Reciprocal Exchange Program, Carrasquilla introduced the girls to life, career and STEM experiences of her fellow faculty members at ASU and the Fulton Schools.

When presented with the opportunity to help with Carrasquilla’s activities in Kenya, Andrea Richa, a professor of computer science and engineering who specializes in network algorithm research was “very excited to be able to contribute to such a high-impact high school outreach program.”

Richa already has an outreach activity for high schoolers called “The Superpowers of Swarms,” in which she leads activities to show how computer scientists take inspiration from nature, such as ants, bees and fish, to help robot swarms perform tasks. High school girls in Samburu County, Kenya, watch an interview with Amy Robinson, a graphic designer with the Arizona Cardinals football team and freelancer. Christina Carrasquilla shared Robinson’s story about balancing a career and family as an example of what the students could aspire to achieve. Photo courtesy of Christina Carrasquilla

Carrasquilla also reached out to Arizona women of color to show the girls an example of what their futures could look like.

Amy Robinson, a graphic designer with the Arizona Cardinals football team by day and a “part-time solo-preneur” by night, was one of the women whose stories were shared with the girls.

Carrasquilla told of Robinson’s journey to landing a full-time gig in the seemingly male-dominated sports industry and how she balances her career and passions with her life as a wife and mother.

“As a woman of color, they didn’t have to see me in a stereotypical role,” Robinson says. “I own my own company, I work within a well-known organization that embraces diversity. They can be so much more than what society tells them they have to or can be. That’s beyond inspiring.”

Robinson says hearing that the students didn’t think it was possible to work and be a mom was particularly emotional, and she was glad she could share her story to inspire and be inspired herself.

“When [Robinson] talked about her husband and kids, all the girls gasped and started whispering to each other,” Carrasquilla says. “It was impactful for them.”

Robinson considers it her duty to give back to her community, and in this case to potentially aspiring graphic designers in Africa.

“I think it was awesome that Christina was able to go and share not only knowledge about design and design thinking, but also that she was able to inspire the girls with stories of various women in different areas of their lives making big strides in their careers,” Robinson says. “Hearing that these girls are excited to problem-solve and find out what’s out there and how they fit in, or even stand out to make a difference, is a great feeling. The future is female.”

Making a difference, one classroom at a time

Carrasquilla plans to again apply with Silantoi for the Mandela Washington Fellowship Reciprocal Exchange Program, as well as with other Fellows from the program.

She hopes to work with Mandela Washington Fellow Jennifer Batamuliza from Rwanda next summer to teach a boot camp in Batamuliza’s newly founded non-profit organization that supports girls in tech.

But her partnership with Silantoi isn’t over yet. Before she even left Kenya, Carrasquilla and Silantoi had planned curriculum for three different boot camps to build on what they had already accomplished this summer.

Despite being a continent apart, their shared goals and passions continue to drive good conversations about how to improve and encourage girls’ access to STEM education all over the world. Robot coworkers: How AI impacts the future of work