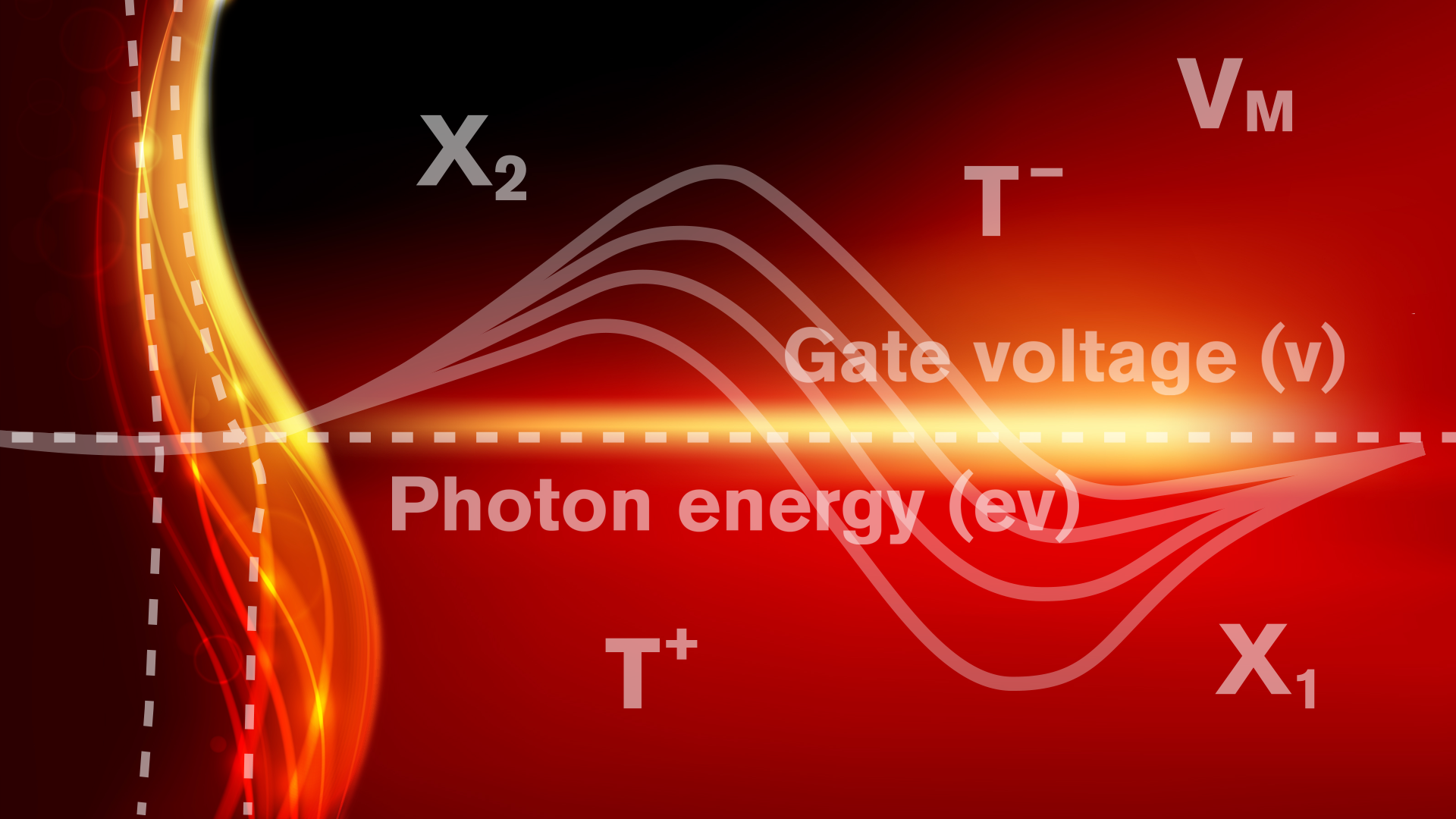 Above: Cun-Zheng Ning, a professor of electrical engineering in the Ira A. Fulton Schools of Engineering at Arizona State University, and collaborators from Tsinghua University in China discovered a process of physics that enables low-power nanolasers to be produced in 2D semiconductor materials. Understanding the physics behind lasers at nanoscale and how they interact with semiconductors can have major implications for high-speed communication channels for supercomputers and data centers. Graphic by Rhonda Hitchcock-Mast/ASU

When something just works, that’s usually a good thing. But for scientists and engineers, when something works and they don’t understand the mechanism behind it, it raises enough questions to keep them up at night.

Cun-Zheng Ning, a professor of electrical engineering in the Ira A. Fulton Schools of Engineering at Arizona State University, has spent the last 10 years researching semiconductor nanophonics — how light and lasers act within the nanoscale of semiconductors.

Understanding the physics behind lasers at nanoscale and how they interact with semiconductors can have major implications for high-speed communication channels for supercomputers and data centers — but only if researchers can figure out how and why they work to reproduce their results. Between 2015 and 2017, researchers at several U.S. universities including Ning and his collaborators at Tsinghua University in China produced experimental results showing that lasers can be produced in 2D materials as thin as a single layer of molecules. Additionally, while other researchers had developed these lasers at cryogenic temperatures, and Ning’s team produced them at room temperature for the first time. They published their results a few years ago in the journal Nature Nanotechnology.

As remarkable as it was that such a thin material could support the laser operation, the conventional mechanism of laser physics would suggest that it’d be impossible to generate a laser with such a low amount of power being pumped into the 2D semiconductor. Yet it worked in Ning’s team’s experiments.

So, though he was excited about the advances his team had made in the research, Ning couldn’t let go of the question, why was it able to work? For the past three years, Ning and his team have been trying to find the answer to that question and their search for answers has led to a new discovery.

Optical gain — the ability of a material to amplify light or photons — is the fundamental concept that drives all lasers. To produce optical gain, electrons are injected into a semiconductor material.

But the new 2D materials Ning and his research team studied several years ago achieved optical gain before the required density appeared to be reached.

To understand why this may have occurred, in a new experiment, Ning and researchers from ASU and Tsinghua University discovered a process that creates optical gain in 2D semiconductor materials.

The properties of 2D materials cause electrons and holes to form tightly bound pairs called excitons, which can bind to another electron or hole to form units called trions.

In his latest line of research, Ning and his peers explored the intricate balance of physics that governs how electrons, holes, excitons and trions coexist and mutually convert into each other to produce optical gain.

“While studying the fundamental optical processes of how a trion can emit a photon [a particle of light] or absorb a photon, we discovered that optical gain can exist when we have sufficient trion population,” Ning says. “Furthermore, the threshold value for the existence of such optical gain can be arbitrarily small, only limited by our measurement system.”

In Ning’s experiment, the team measured optical gain at density levels four to five orders of magnitude — 10,000 to 100,000 times — smaller than those in conventional semiconductors that power optoelectronic devices, like barcode scanners and lasers used in telecommunications tools.

Ning has been driven to make such a discovery by his interest in a phenomenon called the Mott transition, an unresolved mystery in physics about how excitons form trions and conduct electricity in semiconductor materials to the point that they reach the Mott density (the point at which a semiconductor changes from an insulator to a conductor and optical gain first occurs).

But the electrical power needed to achieve Mott transition and density is far more than what is desirable for the future of efficient computing. Without new low-power nanolaser capabilities like the ones he is researching, Ning says it would take a small power station to operate one supercomputer.

“If optical gain can be achieved with excitonic complexes below the Mott transition, at low levels of power input, future amplifiers and lasers could be made that would require a small amount of driving power,” Ning says.

This development would be game-changing for energy-efficient photonics, or light-based devices, and provide an alternative to conventional semiconductors, which are limited in their ability to create and maintain enough excitons.

As Ning observed in previous experiments with 2D materials, it is possible to achieve optical gain earlier than previously believed. Now they have uncovered a mechanism that could make it work.

“Because of the thinness of the materials, electrons and holes attract each other hundreds of times stronger than in conventional semiconductors,” Ning says. “Such strong charge interactions make excitons and trions very stable even at room temperatures.”

This means the research team could explore the balance of the electrons, holes, excitons and trions as well as control their conversion to achieve optical gain at very low levels of density.

“When more electrons are in the trion state than their original electron state, a condition called population inversion occurs,” Ning says. “More photons can be emitted than absorbed, leading to a process called stimulated emission and optical amplification or gain.”

Solving nanolaser mysteries, one step of fundamental science at a time

While this new discovery added a piece to the Mott transition puzzle — it uncovered a new mechanism that researchers can exploit to create low-power 2D semiconductor nanolasers — Ning says that they are not yet sure if this is the same mechanism that led to the production of their 2017 nanolasers.

Work is still ongoing in resolving the remaining mysteries. Such is the role of fundamental research; scientists aim to find one thing, but their efforts find something else, leading to new discoveries and expanding knowledge.

Similar trion experiments were conducted in the 1990s with conventional semiconductors, Ning says, “but the excitons and trions were so unstable, both experimental observation and, especially, utilization of this optical gain mechanism for real devices are extremely difficult.”

“Since the excitons and trions are much more stable in the 2D materials, there are new opportunities to make real-world devices out of these observations.”

This interesting development by Ning and his research team is only at the fundamental science level. However, fundamental research can lead to exciting things.

“Basic science is a worldwide endeavor and everyone benefits if the best people from everywhere can be involved. ASU has provided an open and free environment, especially for international collaborations with top research groups in China, Germany, Japan and worldwide,” Ning says.

Laying a foundation for future supercomputers and data centers

His team has more work left to do to study how this new mechanism of optical gain works at different temperatures — and how to use it to create the nanolasers purposefully.

“The next step is to design lasers that can operate specifically using the new mechanisms of optical gain,” Ning says.

With the physics foundations laid, they could eventually be applied to create new nanolasers that could change the future of supercomputing and data centers. 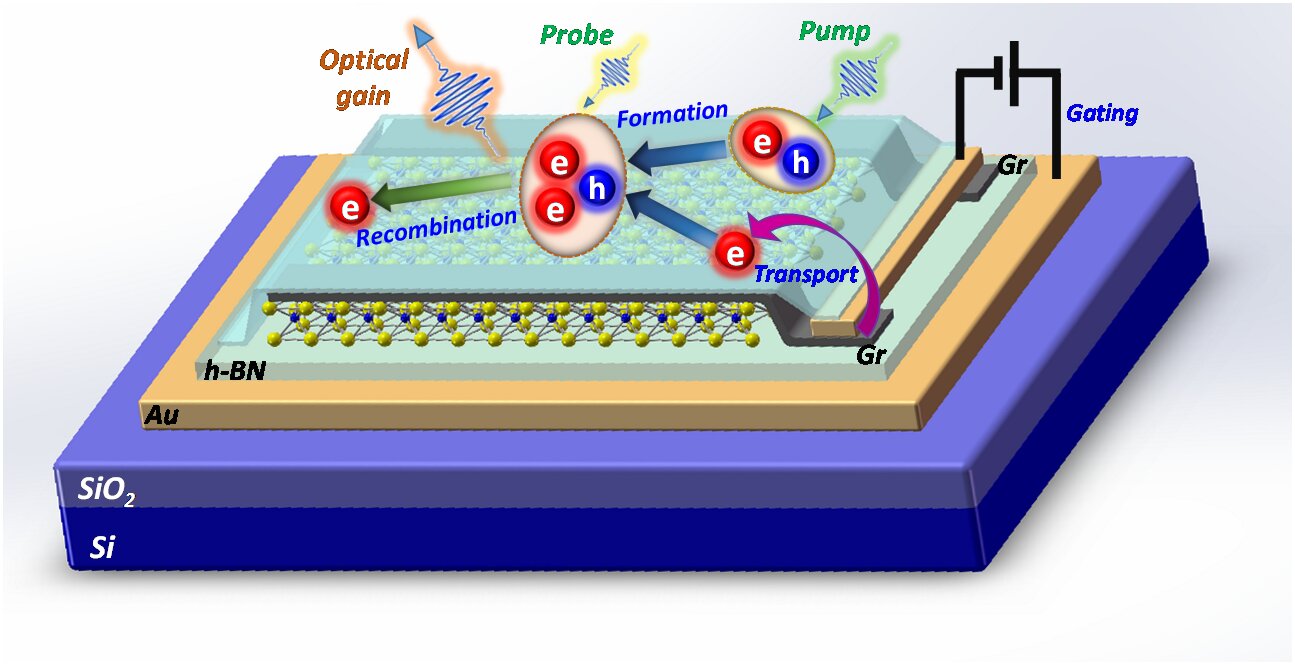 In research conducted by Cun-Zheng Ning and his ASU and Tsinghua University collaborators, a single layer of 2D material was placed on a carefully designed substrate with gold as a back-gate to control the number of electrons in the material. Another laser pumps the 2D material to create excitons, some of which form trions with the pre-existing electrons. The reflected light is monitored to find the signature of amplification. Graphic courtesy of Cun-Zheng Ning