Above: The Fulton Schools Maroon and Gold teams celebrate together after the Maroon team won the 2018 ASU Academic Bowl title. Photographer: Cortney Loui/ASU 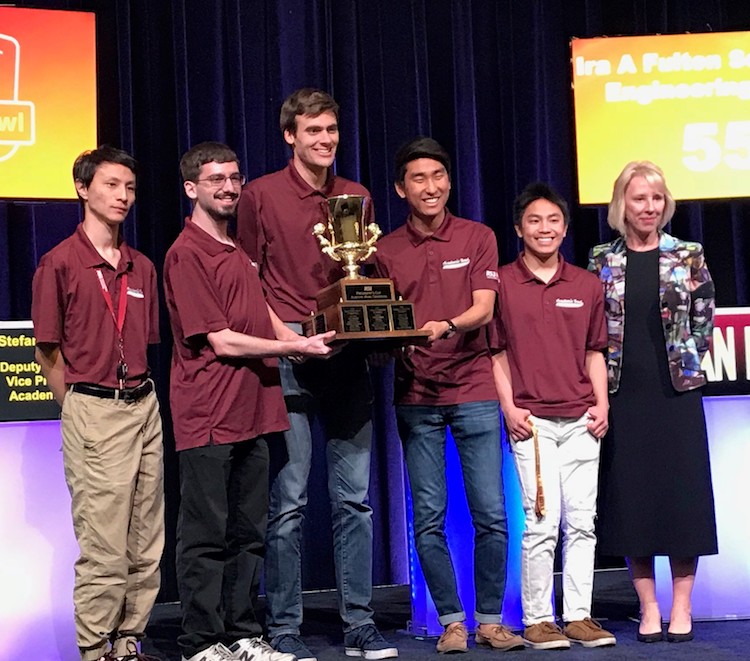 In a matchup between classmates, two teams of students from Arizona State University’s Ira A. Fulton Schools of Engineering faced off at the 2018 ASU Academic Bowl. And even though a Fulton Schools win was imminent, it was the Maroon team that defeated the Gold team to win the title at the Student Pavilion on ASU’s Tempe campus.

Started in 2006 as a showcase for the broad intellectual talent and school spirit of the ASU student body, the Academic Bowl pits 16 teams from various colleges at ASU against each other in a trivia competition that covers everything from political science to pop culture.

The Maroon team earned $24,000 in scholarship funding for winning the title, while the Gold team won $10,000 for their second-place finish.

“We are so proud of the accomplishments of the Fulton Schools Academic Bowl teams,” says Cortney Loui, coordinator of student engagement in the Fulton Schools. “They’ve spent countless hours studying, testing each other and chowing down on pizza. I’m proud of how the teams worked together and separately to prepare for the competition and the strong team spirit throughout the competition. They’ve worked hard for the scholarship funding and it is well-deserved.”

Allan Garry, an aerospace engineering major, has competed in the Academic Bowl for the past four years, serving as team captain during the last two years. As a Fulton Schools captain, Garry led the Maroon team this year and helped guide both the Maroon and Gold teams early on this academic year.

The Academic Bowl took place during the spring semester, but the Fulton Schools teams started preparing in September soon after recruiting was done.

“During the fall semester,  I had the two teams practice together once a month,” says Garry. “This gave us much more practice than a lot of the other teams. During the spring semester, we split up and practiced once a week.”

Enoch Kim, a computer science major and member of the Maroon team, thinks he knows why the Fulton Schools teams were the last two left standing.

“I believe we have an advantage over other teams because the Fulton Schools covers a wide range of disciplinary studies and that allows us to cover each other’s gaps in knowledge,” says Kim.

“It felt like together we had already won on behalf of Fulton Schools,” says Garry. “So it was definitely less stressful than a usual match against another school.”

If you are a fan of trivia, Garry strongly encourages you to try out for the team.

“Even if you aren’t accepted right away, every time you try out is another practice you get to take,” says Garry.

As for Kim’s advice – “Go down all the rabbit holes in Wikipedia. I find it the most entertaining way to ‘study’ for the Academic Bowl.”