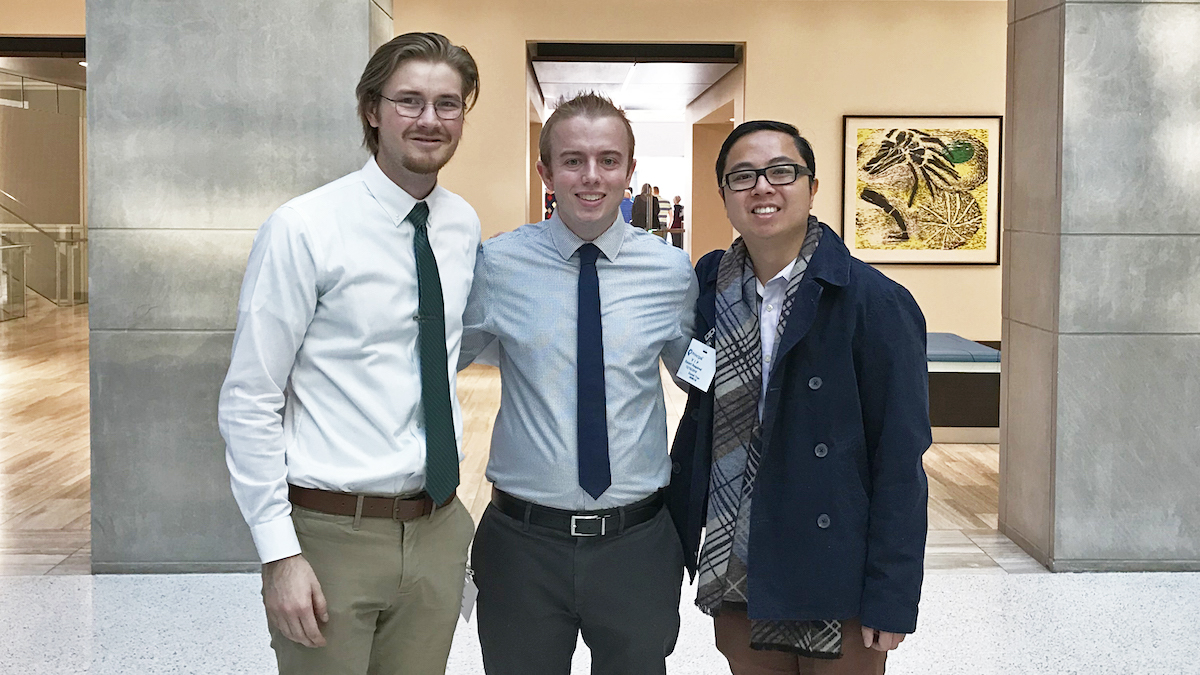 Sometimes the best teachers are our peers. It was that mentality that triggered students from Arizona State University’s Ira A. Fulton Schools of Engineering to team up with students from the W. P. Carey School of Business at ASU to develop a software development learning module that teaches non-computer science and engineering students how to code.

The Fulton Schools students are members of ASU’s Institute for Operations Research and the Management Sciences student chapter, better known as INFORMS.

INFORMS is an international society established to improve operational processes, decision-making and management. At ASU, the student chapter has several different focuses, including service and making academic connections through seminars, networking events and fun activities.

Jorge Sefair, an industrial engineering assistant professor, helps guide the INFORMS student chapter by helping them brainstorm ideas for activities and connecting them with the resources they need. 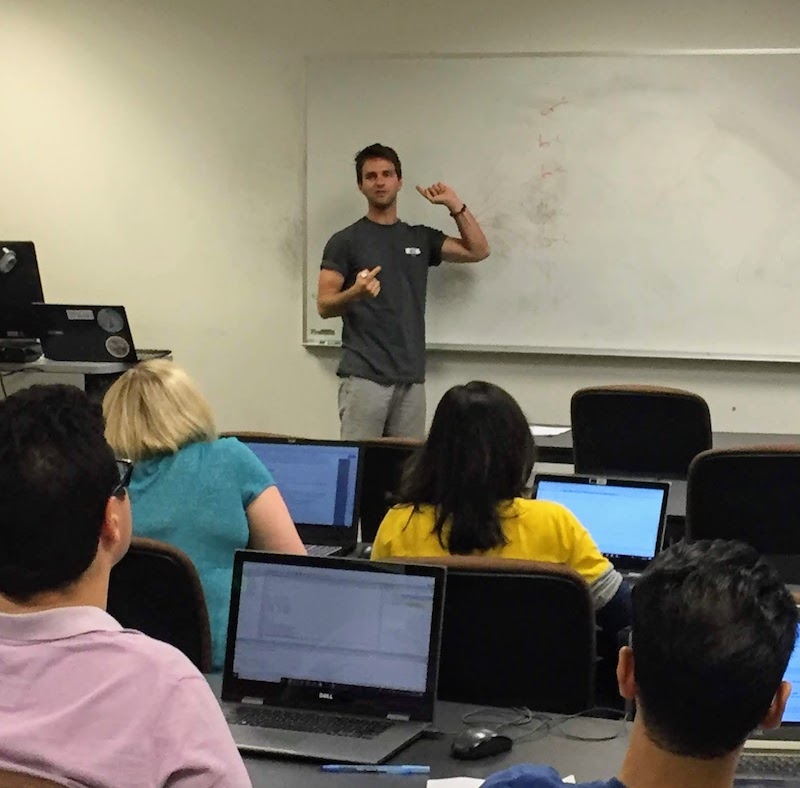 The idea of creating a learning module began in the spring of 2018 when graduate students in INFORMS and undergraduate students from ASU’s Institute of Industrial and Systems Engineers student chapter hosted the Python Seminars, a two-session introduction to the Python programming language.

“Back then we were experimenting with diﬀerent kinds of activities to see which ones our members are mostly involved with,” says Dorukhan Sergin, an industrial engineering doctoral student and vice president of academics for the ASU INFORMS student chapter. “The Python Seminars were professional development activities. We chose to teach Python because it is in unusually high demand both in academia and in industry.”

The INFORMS chapter also wanted to form stronger ties with the  IISE chapter so they decided to make the seminars a joint effort. Their collaboration was awarded the Best Community Builder award at the Fulton Schools Student Organization Awards and Recognition ceremony in April 2018.

“We surveyed our members and the results showed that they wanted to see more of that kind of professional development activity,” Sergin says.

The success of the Python Seminars compelled the group to do more. Over the summer they created a new software development course for students to improve their coding skills. This time the seven-lecture course was jointly developed with the Data Science Society from ASU’s W. P. Carey School of Business and ran throughout the fall 2018 semester.

The group emailed students they felt would benefit the most from the course, and maxed out the enrollment with 30 participating students.

Sergin was the face of the course as he delivered the lectures and created the course content, including presentations, notes and lab projects. Logan Mathesen, who is now an industrial engineering doctoral student, helped take care of the logistics of running the course.

“We believe this to be the only structured attempt to teach software development fundamentals to a group of students who wouldn’t learn them as part of their curriculum,” says Sergin. “We believe that it is way past the time to share these skills to other departments in a world where children are being taught coding in the very early stages of their K-12 education.”

Sergin believes coding skills are necessary to keep up with the fast pace of technology.

“We wanted to make our case strong by demonstrating the feasibility of our idea and the demand for these skills,” says Sergin.

The majority of the participating students in the module were female and the number of participating students from the Fulton Schools and W. P. Carey were evenly distributed, highlighting the demand for the module across disciplines. Most of the students will be graduating in 2019, signaling the need for coding skills as they enter the job market. Now with some experience teaching the material, the team hopes to expand the lectures in the future..

“Our aim is to get more support from the faculty, the dean and anyone who can support us,” says Sergin. “This cannot stay as just a grassroots movement, we need to democratize it to even more people.”

The student members of INFORMS also put their skills to the test in industry competitions in the operations research, management sciences and analytics fields. One of those competitions was the Principal Cup hosted by the University of Michigan INFORMS student chapter in September 2018 in Ann Arbor, Michigan.

The four students created a decision framework called kNN-Stock that fuses machine learning and conventional stock-trading expertise to make optimal trade decisions. The team went on to present their results at the headquarters of the Principal Financial Group, the co-partner of the challenge, in Des Moines, Iowa.

“I really enjoyed going to the headquarters [of Principal] to present our results and get objective feedback from [Principal] on our model,” says Nathan Gaw. “They have a lot of experience in industry and I felt their feedback was really useful in how we can improve the model in the future.”

According to Gaw, the chief data scientist of Principal was impressed with their ideas and may implement some of them into their research.

Recognition for a job well done

Chapters are graded on the communications, such as newsletters and websites as well as the content of their meetings and networking events, including special events and service initiatives the chapter hosts during the academic year. 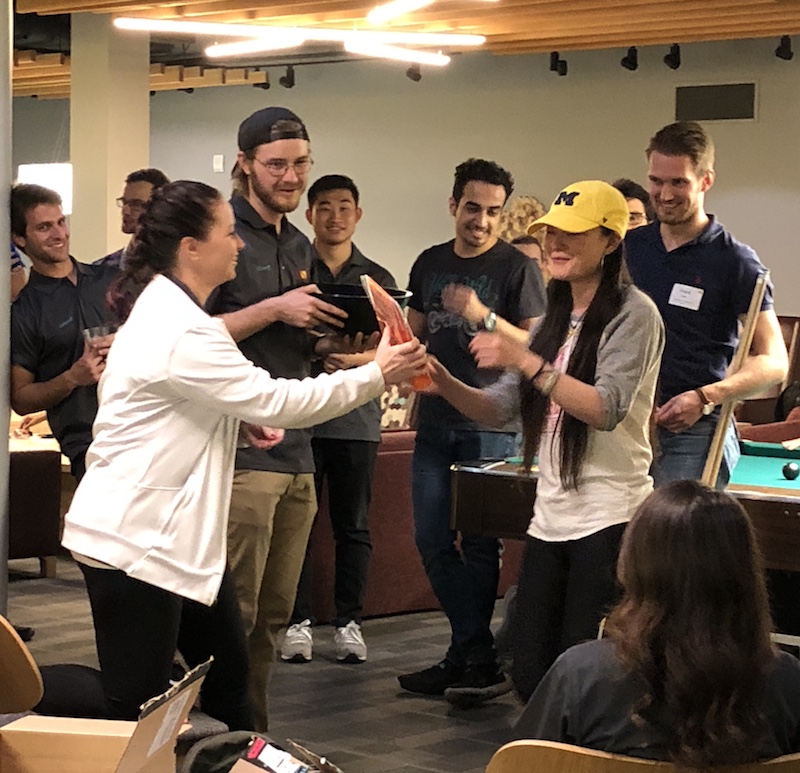 Last November, the 2018 INFORMS Annual Meeting was held in Phoenix. Mathesen and Gaw decided to use the meeting as an opportunity to showcase the ASU INFORMS student chapter and ASU’s Tempe campus. As a result, the chapter hosted the first-ever student mixer held in conjunction with an INFORMS meeting.

“We thought it would be a great opportunity for students to get to meet each other in a more informal setting and potentially make some connections for the future,” says Gaw.

The mixer event featured a hike up ‘A’ Mountain and tours around campus led by the student chapter members. The event proceeded to the Memorial Union and featured a dinner, live music, a raffle and games inside Sparky’s Den.

“They coordinated everything with the conference staff,” says Sefair. “They engaged many students from around the world and showed them what it means to be a Sun Devil!”