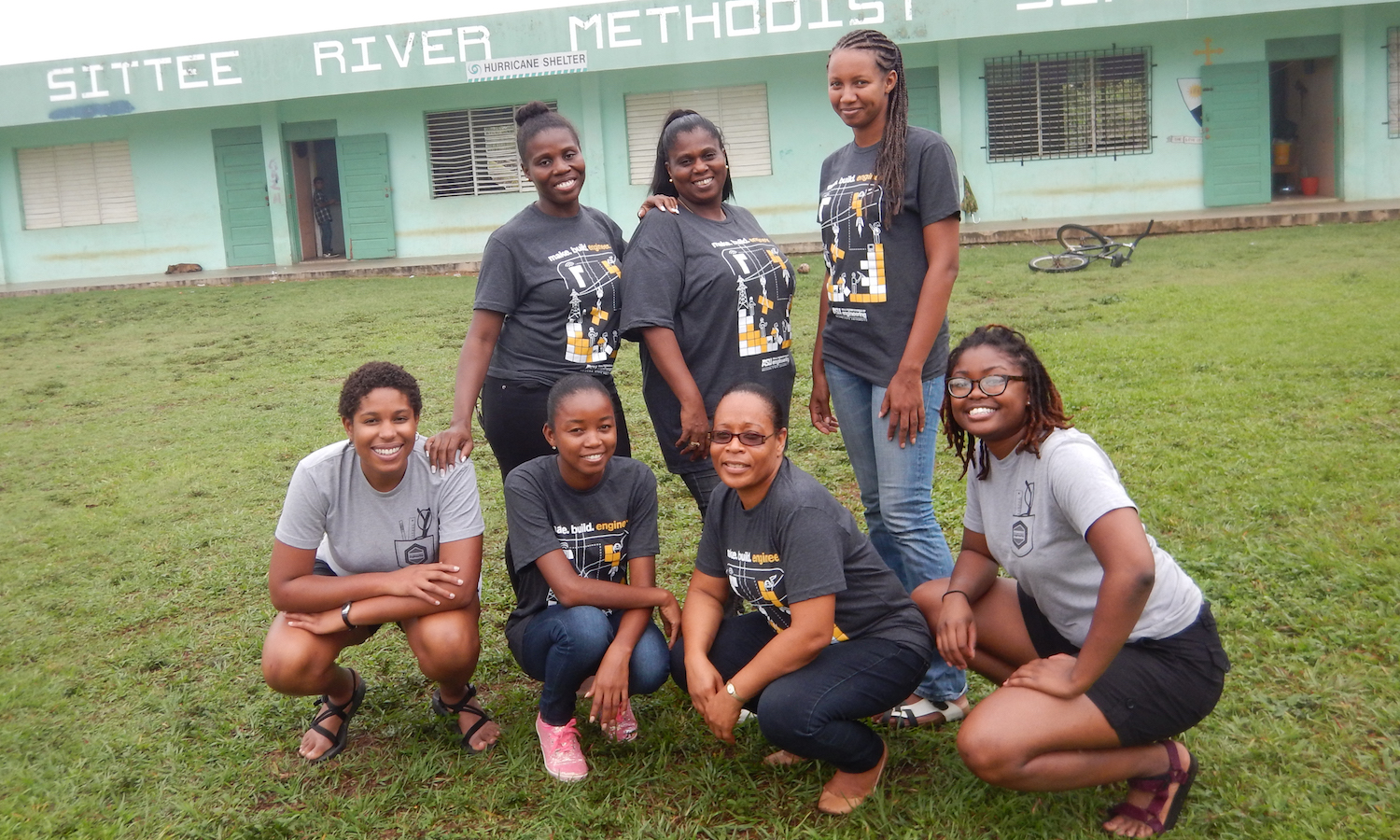 Evvan Morton (far left), a sustainable engineering doctoral student in the Ira A. Fulton Schools of Engineering, and Shakira Hobbs (far right), an engineering research associate at the University of Virginia, are shown with school teachers in the Belize village of Sittee River. Morton and Hobbs are leaders of a project aimed at helping the remote rural community to adopt renewable energy technology and establish an environmentally safe waste management system. Photo courtesy of Evvan Morton and Shakira Hobbs

Evvan Morton has a clear-cut, big-picture career ambition. She wants to help bridge the gap between the worlds of engineering and science and the sphere of public policy on a global level.

As Morton sees it, bringing the goals and mindsets of those often-divergent camps into harmony is the only way definitive progress can be made against widespread looming threats to the planet’s environment.

For the past several years, she has been taking on college studies, research and outreach projects to gain the knowledge and experience for playing a role in prevailing against such a vast and complex challenge.

During her junior year as a materials engineering student at the University of Cincinnati, Morton joined a small team of students on a trip to Haiti to build a home for earthquake victims.

In her senior year she took a course focused on developing solar power solutions for energy-poor regions of Africa. She and other students in the class traveled to Ethiopia to help install a photovoltaic solar power system for a health clinic.

After earning a bachelor’s degree, Morton did two stints as an intern at the National Renewable Energy Laboratory in Golden, Colorado. One of her assignments there was with the Strategic Energy Analysis Center researching the role of the United States in deployment of renewable energy technologies in developing countries. She performed a case study of a project to assist the Philippines in pursuing sustainability objectives.

Morton’s most long-term hands-on project began in 2015, the summer after her first year in the Civil, Environmental and Sustainable Engineering doctoral program in Arizona State University’s Ira A. Fulton Schools of Engineering.

She became part of a team of engineering teachers, researchers and students at the University of Virginia, the University of North Carolina at Charlotte and Clemson University working to introduce renewable energy technology and environmental protection practices to a remote rural village — Sittee River, population estimated at no more than 350 people — in the Central American country of Belize. 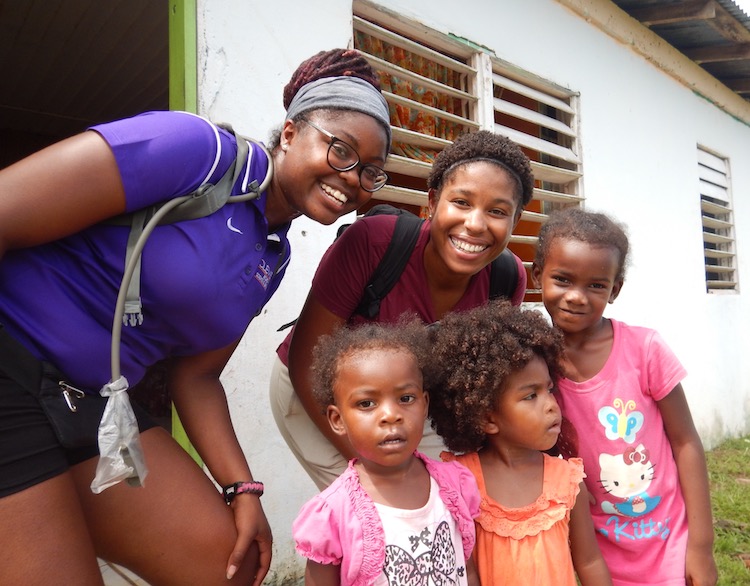 Shakira Hobbs and Evvan Morton pictured with children in the Sittee River community as they conduct a house-to-house census in the village. Morton and Hobbs also interviewed residents about their waste disposal practices as part of their efforts to introduce environmental health measures to the village. Photo courtesy of Evvan Morton and Shakira Hobbs

In July, the team is returning to the village for a fourth straight summer for a month-long stay to continue training members of the community to participate in the project and “empowering them to take ownership of it,” Morton says.

The mission is to establish a sustainable waste management system in Sittee River, which started with the team building an anaerobic digester for use by the village residents.

The digester consists of a large container in which food waste and other organic waste can be placed — including manure, which acts to balance the acidity level inside the container — to undergo a series of biological processes through which microorganisms break down biodegradable material in the absence of oxygen.

One of the end products of the process is biogas, which can be combusted to generate electricity and heat, or be processed into renewable natural gas and fuels. The team has designed its digester to provide gas that villagers can use to cook food.

“You can hook up gas from the digester to a stove. And the sludge left over from the anaerobic breakdown of the waste material can be used for fertilizer,” Morton explains.

With the extra fertilizer, villagers can expand their farming and produce more vegetables to sell to support their local economy, she says.

The anaerobic digester is only one phase of the project. The digester enables villagers to refrain from their usual practice of burning waste materials in open fires, which puts harmful particulates in the air and produces the kind of greenhouse gas emissions that contribute to troublesome climate change.

“We want to make this the starting point for a broader waste management system that would include people in the village employed to pick up the waste to transport it to a landfill or some type of recycling center,” Morton says. “There aren’t many recycling resources and the closest landfill is an hour’s drive away and most people don’t have a car, so there are hurdles.”

Despite the low-tech devices involved and the project’s relatively small scale, it presents all the challenges of instituting sustainable energy systems and environmentally beneficial practices in larger regions of developing countries.

Project team members have had to find effective ways to communicate with, earn the trust of, educate and motivate people in a different culture.

They have had to build a working relationship with the village council and will try to help the community seek aid from Belize’s government to support Sittee River’s local sustainability efforts.

They also had to secure funding for the project, which they did through a competitive process for a grant from the Integrative Graduate Education and Research Traineeship: Solar Utilization Network, known as the IGERT-SUN program, a National Science Foundation doctoral student training program.

The Belize project has so far also led to the team establishing BioGals, a nonprofit group working to empower and increase the visibility of women of color who are conducting research to develop sustainable solutions to problems around the world. 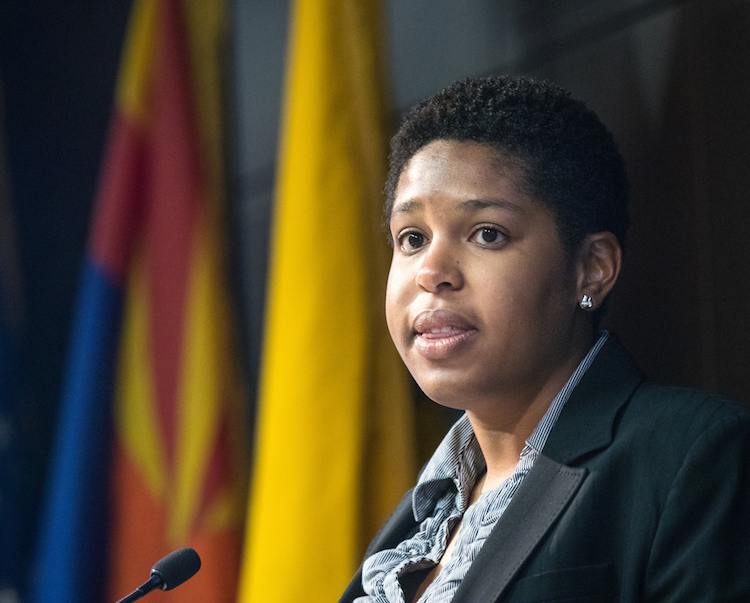 Coincidently, Morton has recently been elected president of ASU’s Black Graduate Student Association, whose empowerment goals align with those of the BioGals organization.

The project also relates to the doctoral research Morton is doing under the supervision of Klaus Lackner, a professor in the School of Sustainable Engineering and the Built Environment in the Fulton Schools.

Lackner directs the Center for Negative Carbon Emissions and is an international leader in the promising area of carbon-capture technology.

Systems being developed in Lackner’s lab have the potential to contribute substantially to combating the negative impacts of climate change by removing harmful carbon dioxide from the atmosphere.

Morton’s role in that research encompasses both technical and public policy aspects of paving the way for the use of carbon-capture systems.

“My system will integrate [Lackner’s] technology with sequestration and carbon-capture permitting methods to create a sustainable waste management system for a negative carbon emission future,” she says.

“Evvan is a natural leader who is committed to helping people to do the right thing for the environment,” Lackner says. “In Belize she is doing this on a village scale, but for her thesis she is exploring how this can be achieved on a global scale. How can individuals and corporations be convinced of the critical need to prevent and clean up the carbon waste we produce every day by consuming energy?”

Along with the sustainable engineering doctoral degree she will earn within the next two years, Morton is studying to earn a graduate-level academic certificate in Responsible Innovation in Science, Engineering and Society from ASU’s School for the Future of Innovation in Society.

With those credentials and the international experience she is getting through community outreach projects, Morton says she hopes to get on a career path to becoming a decision maker in matters that help turn the tide for the country and the world toward an environmentally sustainable future. Making robots accessible to all